Aventon electric bicycles change the game. They bring comfort into the fold while ensuring substantial electric motor power that gives the rider a range far greater than many other brands. On average, Aventon's electric bikes have a battery range of 45 miles. That kind of range coupled with fat tires, upright positioning and comfortable saddles make Aventon ebikes approachable for so many! Be sure to check Aventon electric bikes out at your favorite Mesa bike shop, Global Bikes.  Global Bikes & E- Bikes is not only Arizona's leading E-bike authority but we are Arizona's Top Aventon Retailer.  Swing by and see us and test ride an in stock Aventon E-bike Today!  Locations in Mesa, Gilbert, Chandler, and Phoenix/Ahwatukee. 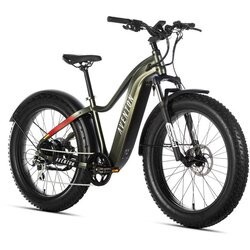 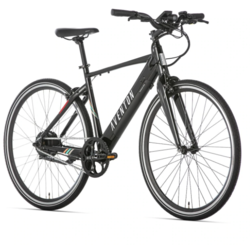 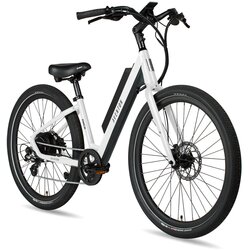 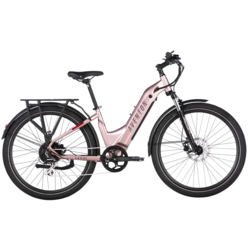 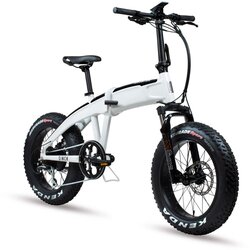 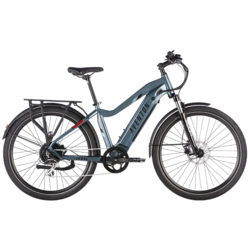 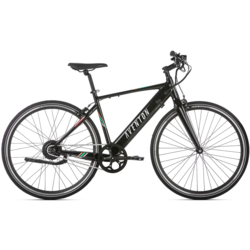 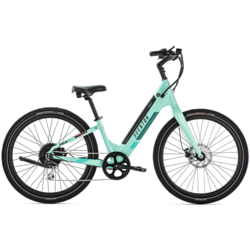 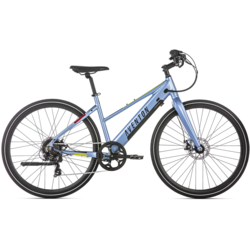 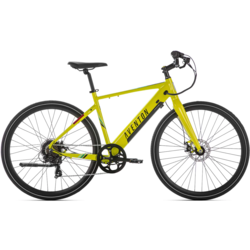 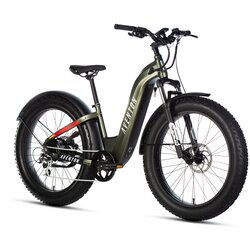 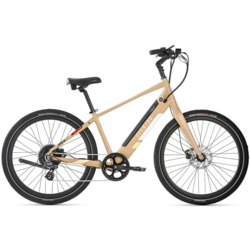 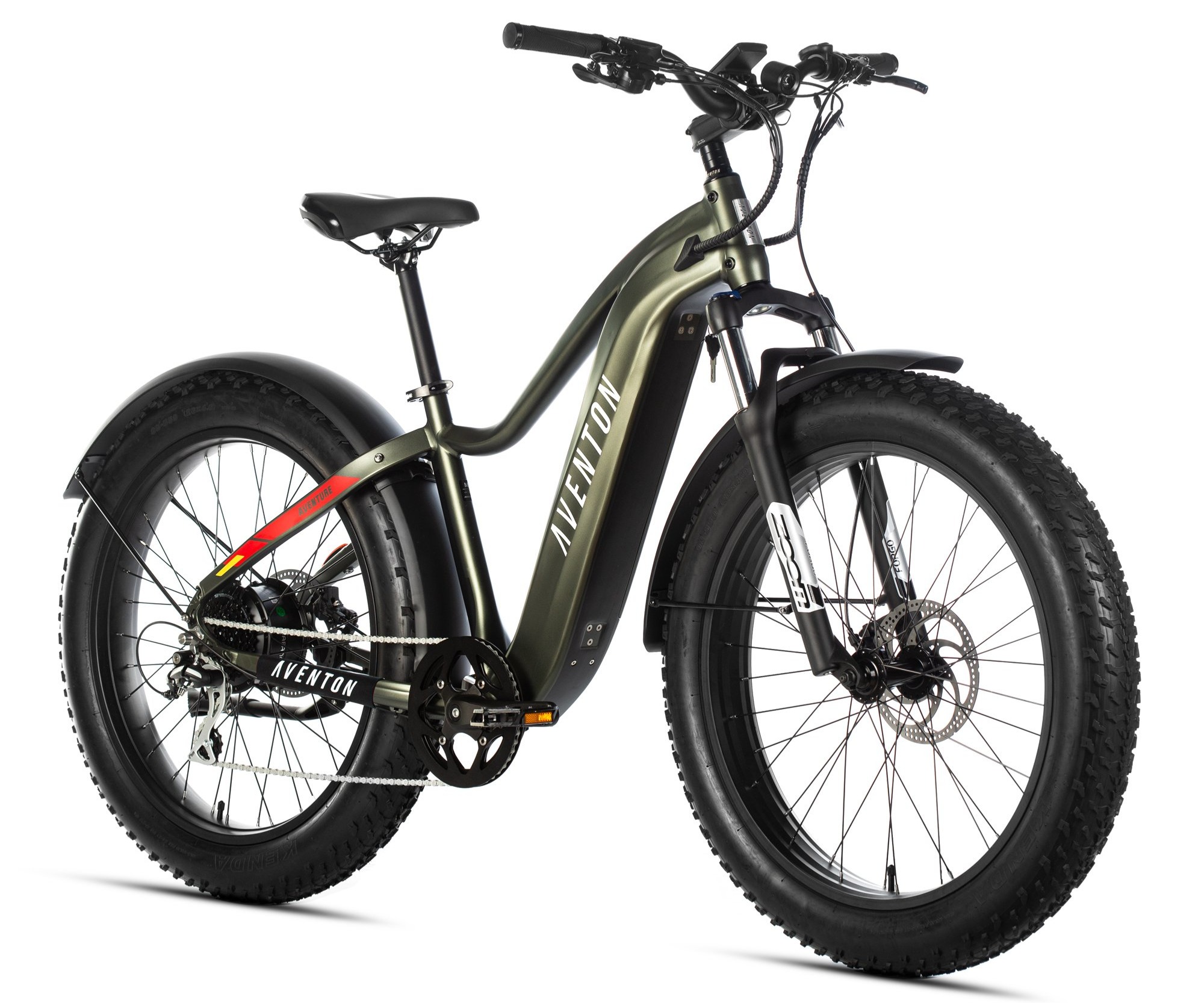 The Aventure is Aventon's flagship performance and comfort model. It has an average of 45 miles battery range, fat tires and a comfort saddle. The design is intended to make riding enjoyable by being comfortable! And for those looking for performance, note all Aventon's models of electric bicycles have both pedal assist, and a throttle to use depending on the rider's motivation! The Aventon Aventure is perfect for exploring Arizona, whether your cruising Chandler's Canals Banks or Flagstaff control roads the Aventon Aventure certainly will not disappoint.   Available now at Global Bikes Chandler, Gilbert, Mesa, and Ahwatukee. 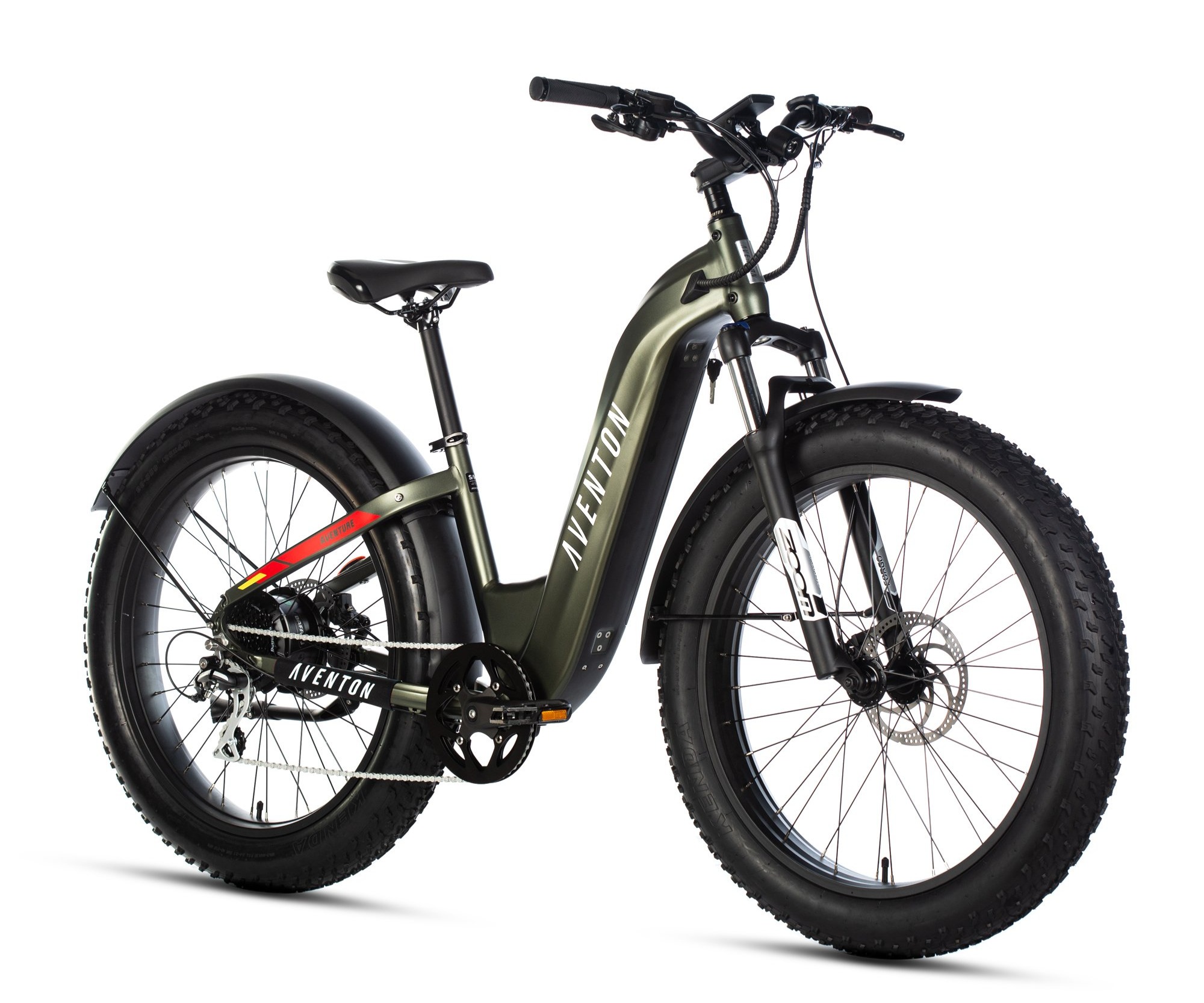 The Aventure Step-through boasts all the same performance and comfort at the standard/conventional model, but with the ease of getting on and off the bike optimized for ease.  Note that step-through style frames are no longer "Ladies" Bikes.  The majority of bike that we sell at Global Bikes have step through frames. Turns out the men like to hop on off a bit easier as well... 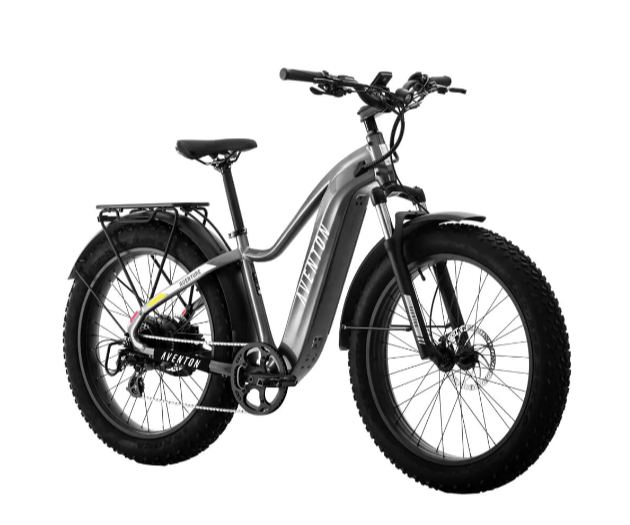 Choose your own adventure with the brand new Aventure.2, fully loaded with a torque sensor. Its torque sensor has intuitive technology that amplifies your pedaling cadence, promoting a more natural riding experience. Switch between 4 levels of pedal assist and throttle to bring you more of what’s out there without breaking a sweat. Go beyond the average dirt road with 4” fat tires, a suspension fork, and a powerful motor that will cover ground over sand, rock, or snow with ease.

Day or night, its integrated lights will provide clarity in low lighting conditions to see and be seen, while its new turn signaling capabilities let those behind you know which direction you plan on going. This combination of rugged elegance and innovative performance makes the open landscapes of the world feel like your own private playground. Discover what awaits you around the next bend. 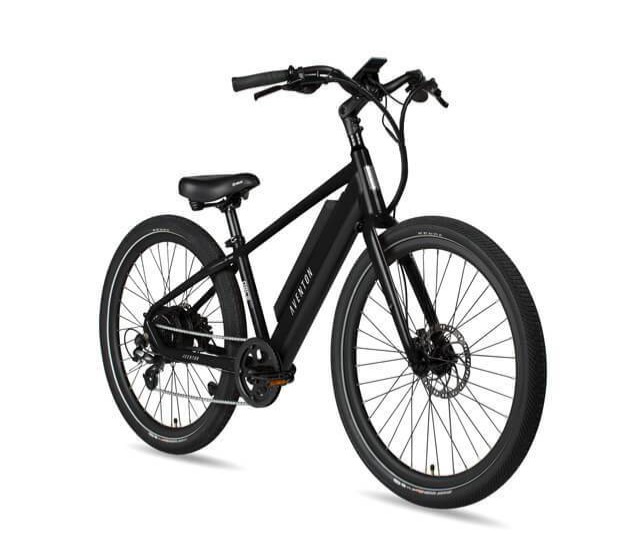 The conventional Pace 500 is a do-it-all go anywhere electric bicycle. With 45 miles of average range, comfort saddle and an upright position, it can replace your car for those neighborhood errands. Take a look at both the conventional and the step-through models.  The Aventon Pace series is a solid price conscious selection that will offer miles of smiles.  Originally making it's debut in 2018 we (Global Bikes) have sold countless Pace models and can definitely attest to the quality and reliability of the Aventon Pace.

Our In Stock Inventory 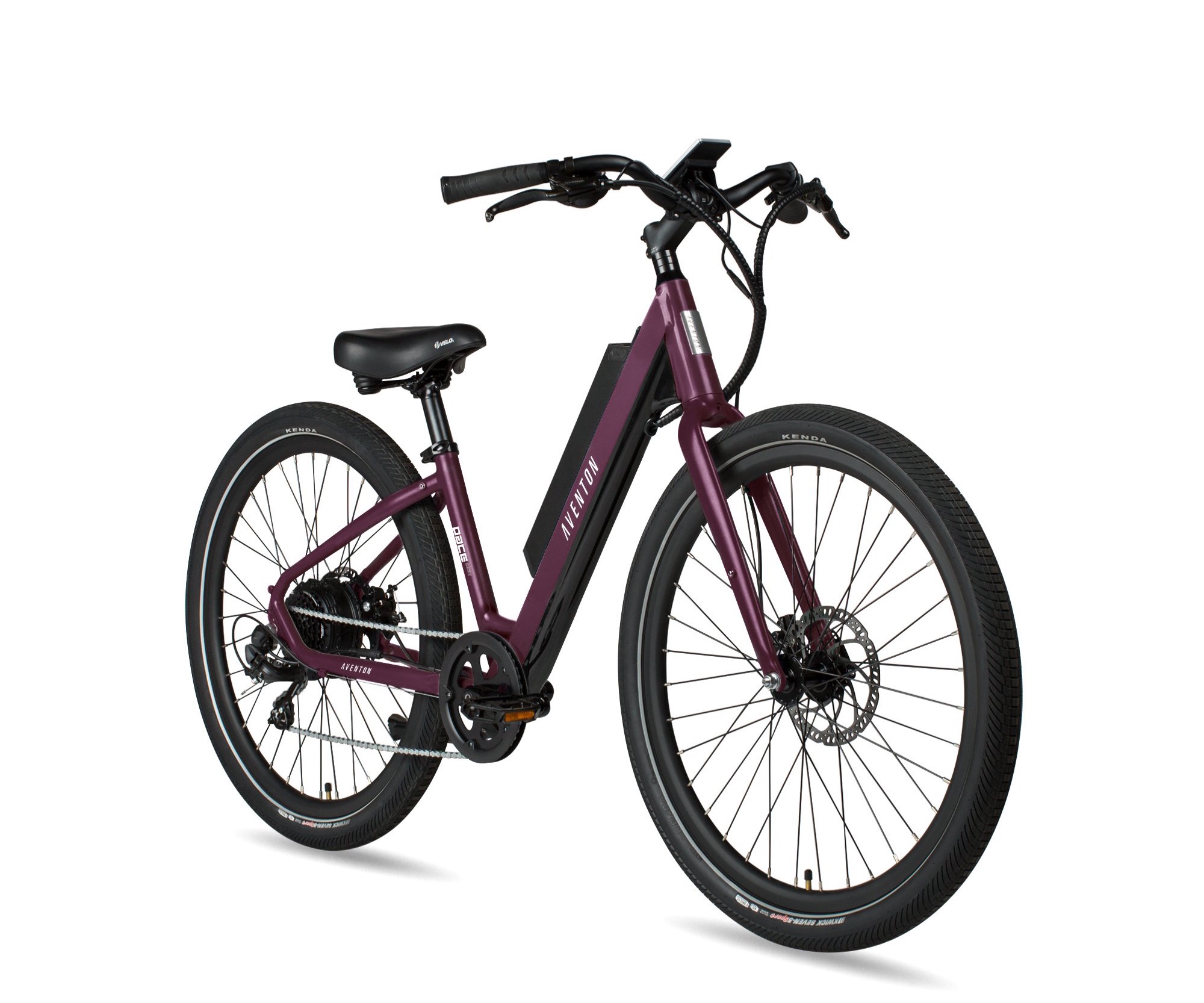 If you don't like the drag of straddling a conventional bike, look into all the Aventon's step-through models. The Pace 500 Step-Through delivers range, comfort and ease of use all in one delux package. 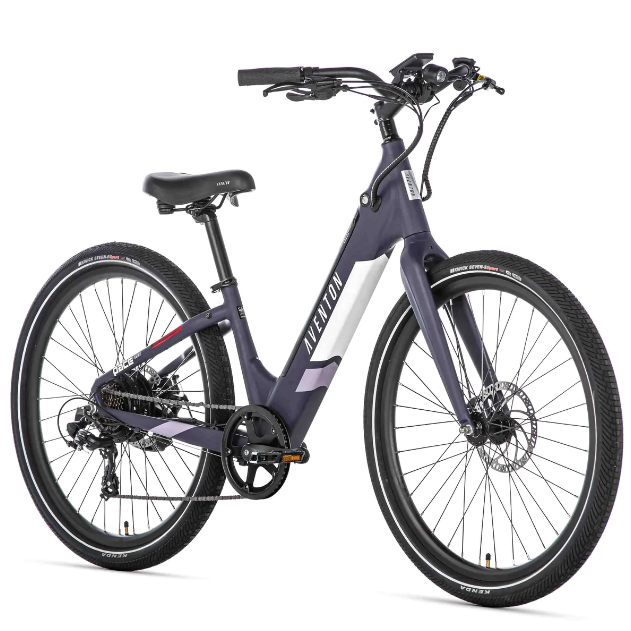 The Next-Gen Pace 350 Step-Through, has set the ebike bar high, offering riders a combination of accessibility, comfort, and power with affordability. The step-through feature makes it a breeze to get onto and its upright frame ensures a relaxed and comfortable riding posture. Five levels of pedal assist allow you to set your own pace and go where you want to go, while a throttle function will take over for those moments where you just aren't up for pedaling. Don't plan on using much assist?  The Pace 350 could be the perfect match, either may (350 vs 500) the Avenon Pace series of bikes have been an awesome part of our product offerings at Global Bikes & E-Bikes. 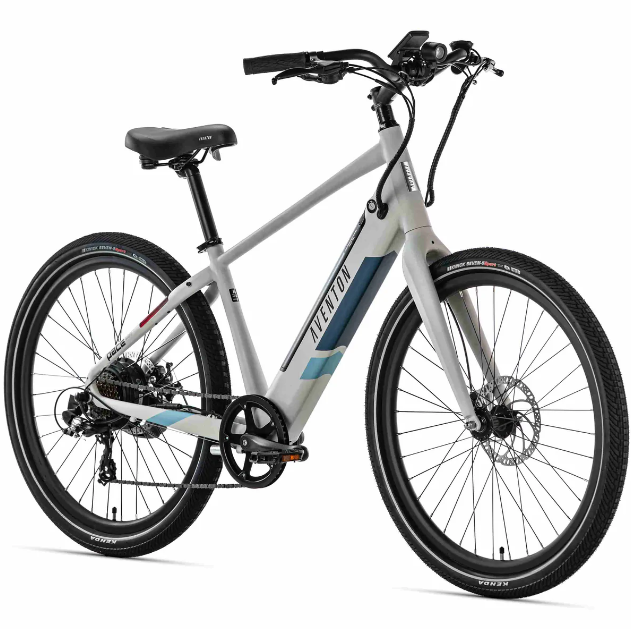 The Next-Gen Pace 350 has set the standard high in the ebike world, combining comfort and power with affordability. This ebike breaks the mold of what making a high-quality ebike available to everyone truly means. An upright frame with a cushioned saddle provides the most relaxed and comfortable ride in its class. Add in the now fully integrated battery along with the integrated tail and headlights, you have a sleek ebike that can also perform. 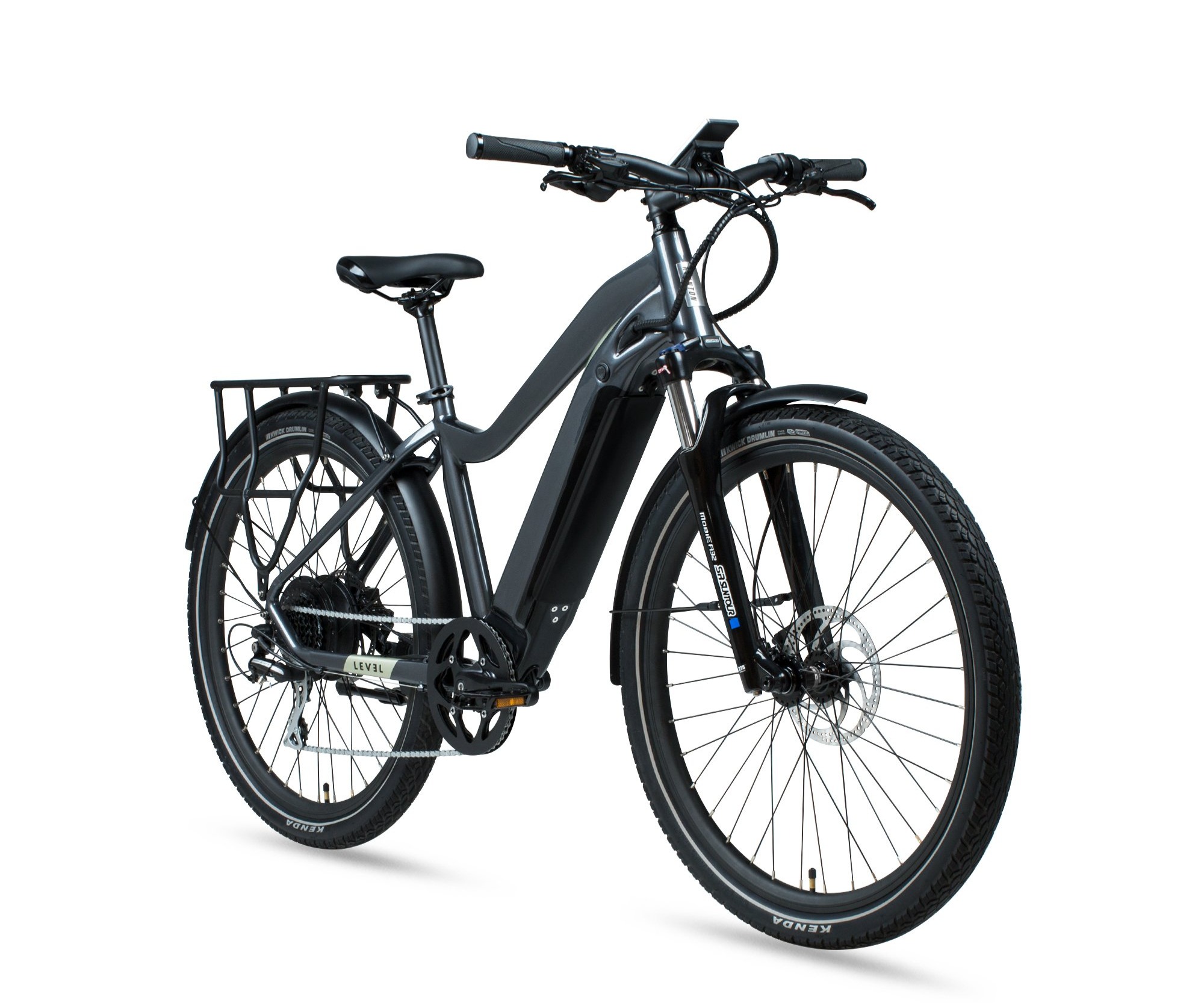 45 miles of range to get you to and from the job or the store with ease and comfort, the Level Commuter Ebike makes it possible to leave the car at home and enjoy the ride to work, the gym, the store or wherever you need to go!  With all the Bells and Whistles anyone would ever need the Level Commuter series has been one the best selling commuter style E-bike offerings we have ever had at Global Bikes & E-bikes. Swing on by and take a test ride today!   - please check online availability prior, these have been going fast:) 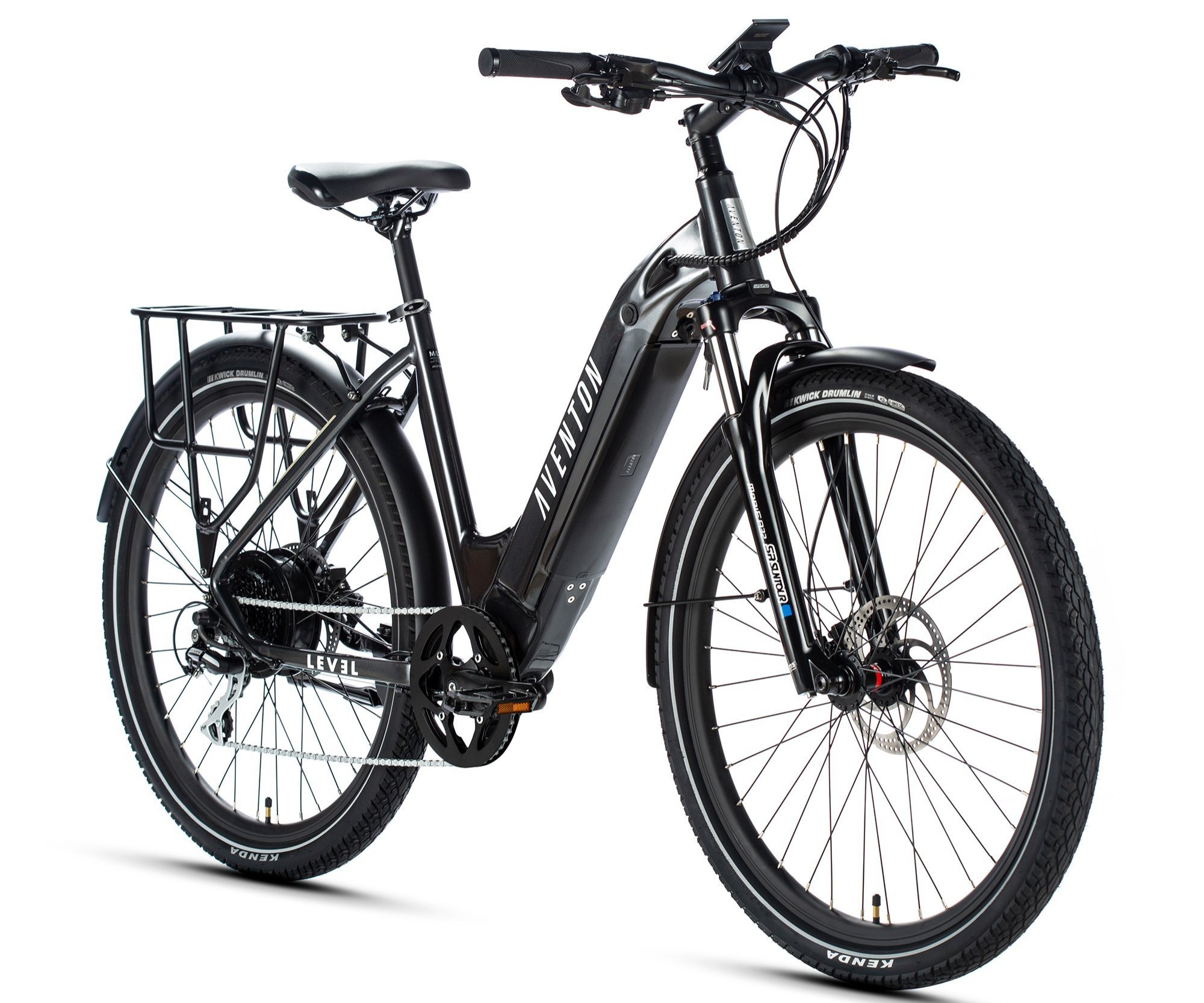 Take your commute to the next level of comfort without sacrificing anything! The Level Step-through is everything the normal Level is, but with easier mounting and dismounting via the step-through frame.  The Commuter Series is ready to roll with factory installed front and rear fenders and rear rack making the Level Commuter one of the best overall values at Global Bikes & E-bikes. 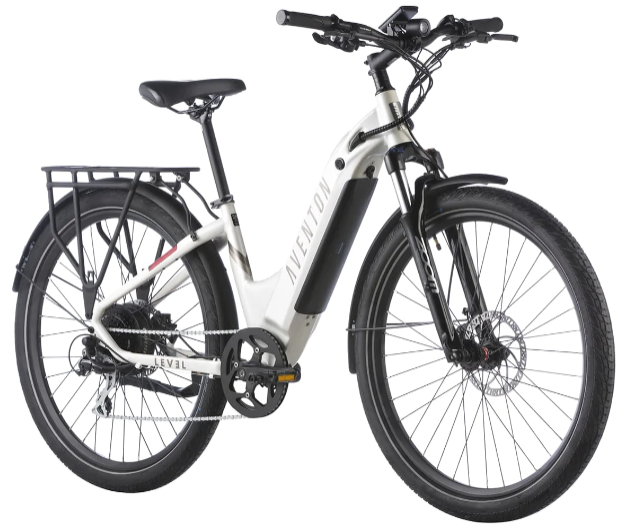 The Level.2 Step-through is the perfect balance of comfort, efficiency, and ease of use. Preinstalled fenders, a durable rear rack, and a front suspension fork mean that wherever the road takes you, you’ll be protected from the elements, carrying all that you need, without feeling a single bump. Its integrated features, like the battery and front, rear, and fender lights, will take you further than before while ensuring you remain visible to others, while the step-through frame makes hopping on and off effortless. Equipped with a torque sensor, Level.2 Step-through intuitively matches your riding efforts, giving you ultimate control over how fast you commute to work mid-week and how leisurely you ride on weekends.  Note that step-through style frames are no longer "Ladies" Bikes.  The majority of bike that we sell at Global Bikes have step through frames. Turns out the men like to hop on off a bit easier as well... 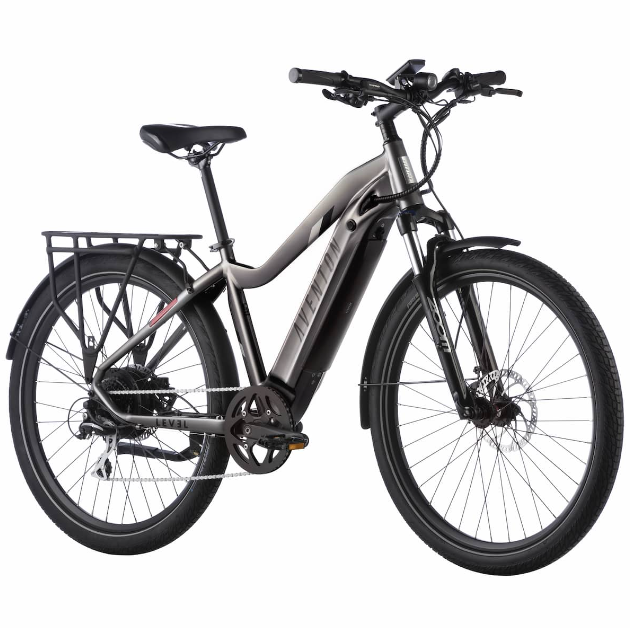 Reinvent joyriding with Level.2. An upgrade to our flagship commuter ebike, Level.2 is as innovative as it is efficient. A fully integrated battery, four integrated lights, and a front suspension fork provide ultimate comfort and safety no matter the terrain or time of day. Equipped with preinstalled fenders and a rear rack, Level.2 can transport it all, from work essentials to picnic goodies, without the elements taking their toll. Aventon’s first electric bike engineered with a torque sensor means a more natural riding experience. Take control of your ride with Level.2 intuitively amplifying your effort or go against electric and pedal solely with your power.  The Commuter Series is ready to roll with factory installed front and rear fenders and rear rack making the Level Commuter one of the best overall values at Global Bikes & E-bikes. 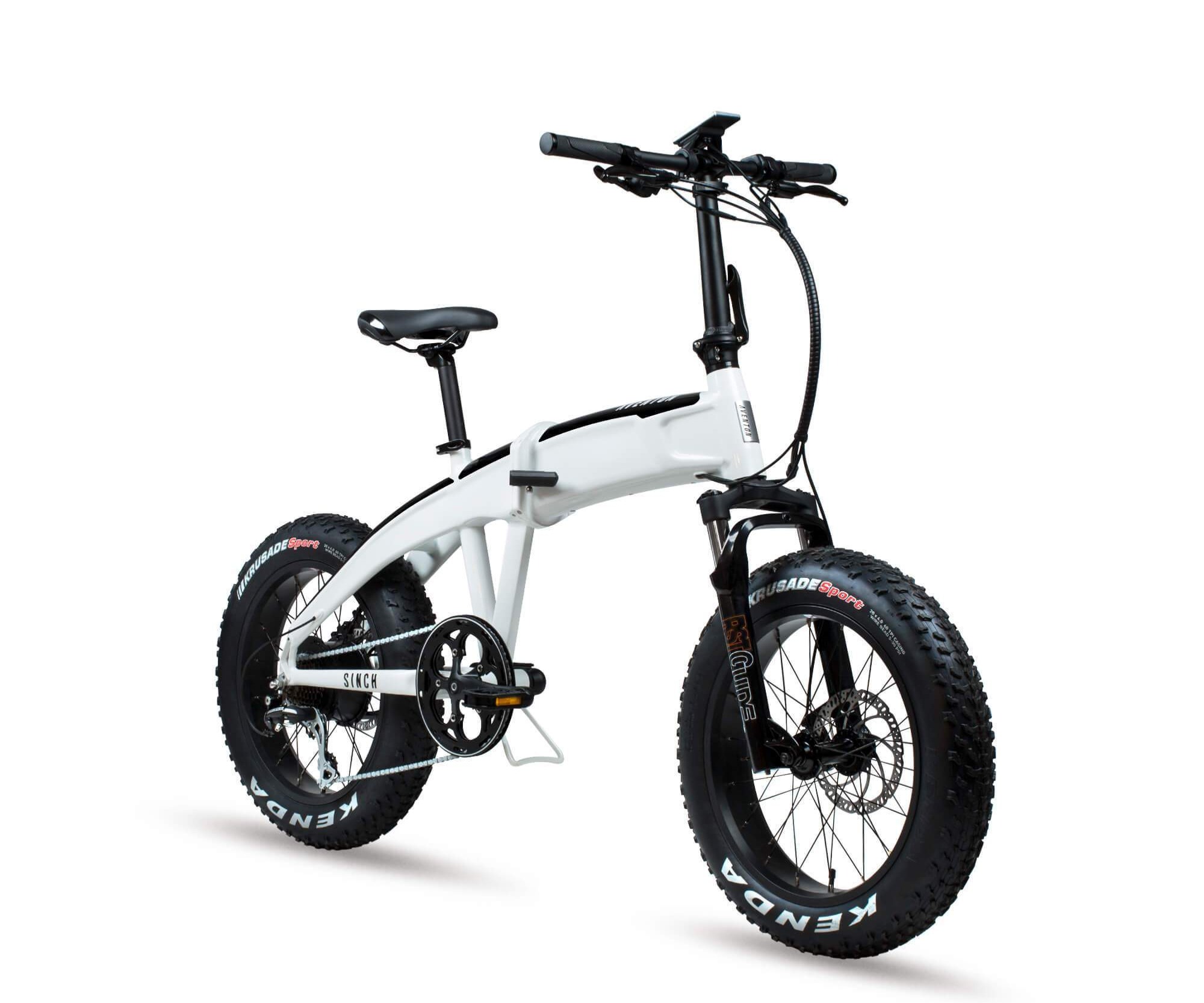 The Sinch is just that... a cinch! A foldable ebike, it's ready for any on the go situation as it easily stows in a car or even a light airplane, so the limits are up to you. With a40 mile range this foldable electric bike can get you from the airport to the hotel, or home with ease and comfort. 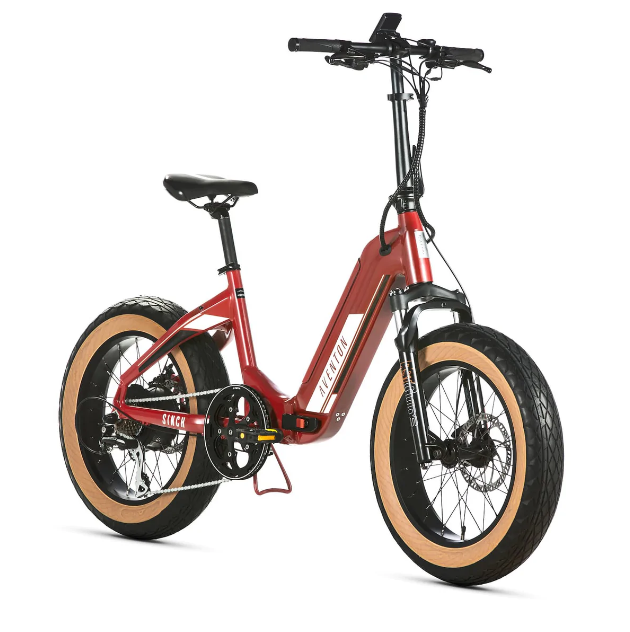 Foldable, portable, storable, powerful, comfortable, and always ready for the journey ahead. The Sinch Step-Through electric bike is the epitome of versatility meeting ruggedness. Store it in the trunk of a car or easily into a RV so you can take it anywhere with you as your very own two-wheeled companion. With 4" fat tires, a front suspension fork and a 500W motor, the Sinch ST can effortlessly take on both a relaxing cruise on pavement and a thrilling run on the trails!

Aventon is a California-based company that produces electric bicycles (e-bikes). The company was founded in 2013 by a team of cycling enthusiasts who saw an opportunity to create high-quality, affordable e-bikes that could be used for transportation, recreation, and fitness.

In the early years of the company, Aventon focused on producing urban and commuter e-bikes, with a emphasis on sleek, modern designs and reliable performance. In 2015, the company introduced its first electric road bike, the Aventon Pace 350, which was well received by riders and critics.

Since then, Aventon has continued to expand its product line to include a wider range of e-bike models, including e-road bikes, e-mountain bikes, and e-cargo bikes. The company has also been at the forefront of the e-bike movement, promoting the use of e-bikes as a sustainable, efficient, and fun way to get around.

Today, Aventon is known for producing high-quality e-bikes at competitive prices, and has a loyal following of rider