How to Hold Your Own on Group Rides and more...

Join us Every Sunday morning for a ride around town! 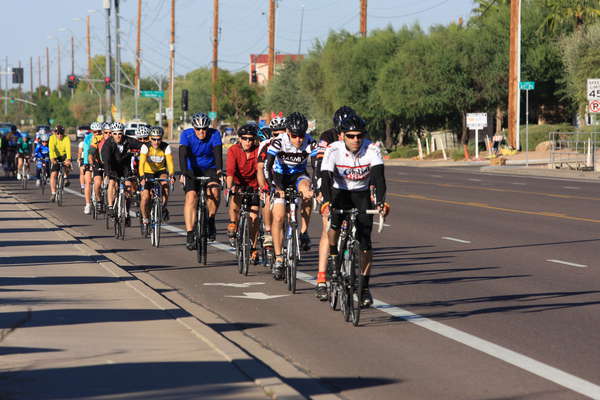 The major activity of any cycling club, racing or touring, is the group ride. As a result, it’s important to know how to hang tough on a given ride and make yourself welcome on the next one. Success is often due to more than fitness. Here’s a club cycling primer!

Some clubs like to start all rides, no matter how fast they’ll eventually become, with 20 or 30 minutes of easy warm-up. If you’re impatient or early, you can cause hard feelings by chafing at the bit to go faster. When you know the pattern, it’s easier to be patient.  Global Bikes motive or traditions during there Group Rides on Sundays are to improve fitness and confidence, and give cycling and safety tips.  Our Group Ride is usually split up into two groups, one usually at 19+ speeds and the other around 15 to 19 speed, allowing slow and fast riders to participate.

Will it be a fast training ride? A leisurely spin? Paceline practice? It’s disruptive when most of the group is thinking one thing while one or two cyclists are on a different agenda. If an easy recovery ride is scheduled, but you're out for hard training, people are going to get angry. Be certain of the ride’s goal before the start.  Global Bikes does a MODERATE ride through Gilbert and Mesa traveling 32 to 45 miles every Sunday.

If you're having trouble taking your pulls at the front, get off quickly and slide back to get maximum draft in the paceline. It's far better to sit on the back and let others do the work than to slow everyone with valiant but sluggish turns at the front.  Global Bikes Group Rides are intended to encourage riders, not discourage them.

As a climb begins, be nestled in the front third of the bunch. Get as much draft as possible. If you can’t hold the pace, don’t blow up trying. Let yourself slide back through the group but still be in contact at the top.  Global Bikes Group Rides do not have steep hills instead they do fun rolling hills.

Stronger cyclists may give you a helpful push as they ride by. Don’t be embarrassed by their help. They probably got towed up climbs when they were starting, too. A short push often allows you to regain your breathing and climbing rhythm so you can continue on your own.  We want to help as many people during our Group Rides.

If you're really having difficulty keeping the pace, get on the wheel of a good rider and mirror his (or her) technique. Use the same gear, stand when he does, take a drink as soon as he reaches for his bottle, and so on. This teaches you good cycling habits. Plus, emulating his movements takes your mind off your own effort and helps you past the hard spots.  Because of our two groups it will be easier for you to find a stronger rider whether he (or she) is fast or slow.

It’s a good bet that other cyclists feel the same way but are reticent to speak up — or can’t, because they’re breathing too hard to talk! Perhaps even the riders who are setting the pace are having difficulty, but they continue to go hard out of vanity or because they think everyone else expects them to. A little communication goes a long way in making a group ride a more pleasant and productive experience.  During a Global Bikes Group Ride they will teach you signals that will make it easier to communicate.

Find one closer to your ability level. There’s no shame in rationally assessing your strength and choosing cyclists who share it. You’ll actually improve faster if you ride with a group that you are on equal terms with. You’ll be able to practice paceline cycling, following a wheel, riding in close quarters, cornering in a group, and other important skills.  Our Group Rides have an A group and B group allowing a larger variety to ride.

Frequently riding with a too-fast group will make you tired. You won’t improve as rapidly as you might with more rest. A pace that’s too fast will hurt you mentally, too. You’ll begin to associate cycling with pain, misery and disappointment. Don’t let your ego overpower your better judgment. An appropriate dose of humility now will pay dividends later.  Global Bikes Group Ride will try to help you with confidence, encouragement and etiquette.