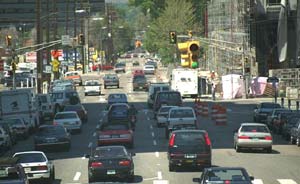 Think about the roads and streets where you live and work. What do they look like? Do they have two lanes? Four? Maybe even eight?

Many of us must live by expressways and choked urban roads with four or more lanes that roar incessantly with high-speed traffic. Others put up with dangerous rural roads without shoulders.

Is this how you want to live? Driving in gridlock is frustrating enough. Not to the mention the noise, pollution and threatening nature of modern SUVs, trucks, automobiles and road ragers.

Wouldn’t it be nice if our roads were friendlier; if they offered a more intelligent and responsible range of commuting options? Wouldn't it be nice if communities weren't endangered by wider, faster and more dangerous roads? Wouldn't you like roads to include options for all potential users? If you said yes, you agree with millions of Americans that would like to Complete the Streets.

Completing the streets means routinely accommodating travel by all modes. This will expand the capacity to serve everyone who travels, be it by motor vehicle, foot, bicycle, or other means. A complete street in a rural area may look quite different from a complete street in a highly urban area. But both are designed to balance safety and convenience for everyone using the road.

Many Streets Where People Bicycle Or Walk Are Inadequate
Our states, cities, counties and towns have built many miles of streets and roads that are only suited to one travel mode: the motor vehicle. These roadways often lack sidewalks, have lanes too narrow to share with bicyclists, and feature few, poorly marked, or dangerous pedestrian crossings. A recent federal survey found that about one-quarter of walking trips take place on roads without sidewalks or shoulders, and bike lanes are available for only about 5 percent of bicycle trips 1.

Streets without safe places to walk and bicycle put people at risk. While 10% of all trips are made by foot or bicycle, more than 13% of all traffic fatalities are bicyclists or pedestrians 2. More than 5,000 pedestrians and bicyclists die each year on U.S. roads. The most dangerous places to walk and bicycle are sprawling communities with streets that are built only for driving. A recent study comparing the United States with Germany and the Netherlands, where complete streets are common, found that bicyclist and pedestrian death rates are two to six times higher in the United States3.

And, sadly, states are not building roads as complete transportation corridors. Only one percent of all federal transportation funding goes to bicycle or pedestrian facilities. In 2000, the U.S. DOT issued guidance saying “bicycling and walking facilities will be incorporated into all transportation projects unless exceptional circumstances exist.”

But, incredibly, by their own admission, fewer than half the states follow this guidance!4 Worse, many highway improvements add automobile capacity and increase vehicle speeds, but do nothing to mitigate the negative impact this has on bicycling, walking and quality of life for everyone living near the roads!

Complete streets are also essential for access by people who cannot drive. About one-third of Americans do not drive 5. Roads without safe access for non-motorized transportation represent a barrier for people who use wheelchairs, and for older people and children.

The Solution: Complete The Streets
The Federal government can take the lead by insuring that all projects involving new construction or reconstruction include appropriate provisions to accommodate bicyclists and pedestrians, if bicycles and pedestrians are permitted on the road.

State Departments of Transportation should adopt and implement transition plans that identify the steps they are taking to complete the streets. At the state and local level, transportation agencies should update design, planning, and policy manuals to reflect an integrated approach and should train all personnel to plan and design complete streets. Project checklists and program audits should evaluate roads in terms of how well they serve all users.

The Benefits Of Complete Streets 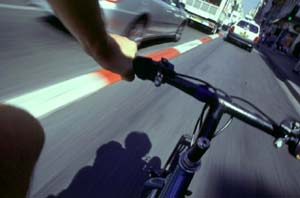 Complete Streets encourage more walking and bicycling. Public health experts are encouraging routine physical activity as one response to the obesity epidemic, and complete streets can help. One study found a 23% increase in bicycle traffic after the installation of a bicycle lane 8; another found that residents were 65% more likely to walk in a neighborhood with sidewalks. 9Streets that provide travel choices give people the option to avoid traffic jams, and increase the overall capacity of the transportation network.

A few advanced communities are already building complete streets. Oregon boasts an exemplary network of state roads for bicycling and walking. Portland, Corvallis, Bend, and Eugene feature prominently in lists of “best places for bicycling” and "most walkable communities." Bicycle commuting in Portland grew 74% in the 1990s 10. This happened in large part because of a state and local commitment to building complete streets. Since 1971, Oregon state law has required that “Footpaths and bicycle trails… shall be provided wherever a highway, road or street is being constructed, reconstructed or relocated”. The state also requires a minimum of one percent of state transportation funds be spent on bicycling and walking improvements.

Americans Need Complete Streets
Half of all trips in urbanized areas are three miles or less, easy distances for walking and bicycling 11.  Two recent polls found that a majority of Americans would like to bike and walk more 12. Spending on bicycle and pedestrian projects has increased dramatically over the last decade. But most of the attention and funding has gone to build specific projects, such as multi-use paths, not to make sure that every resident can safely walk or bicycle where they live. The vast majority of transportation money continues to go to road projects that often do not accommodate all users of the right of way. Transportation agencies need to complete the streets — routinely investing in road designs and facilities that ensure safe, comfortable travel by the millions of Americans who would like to bicycle and walk more often.

How You Can Help 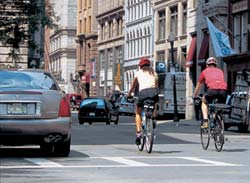 With your help, Complete Streets can become a reality. While this campaign is still in the developmental phase a small amount of effort will help transform an abstract concept into a commonly accepted part of our culture.

At a grass-roots level, you can promote the idea by speaking about Complete Streets with friends and neighbors (show them this article) or writing letters to the editor of your local newspaper or posting messages on bicycling and newsgroup message boards you belong to (provide a link to this article if you wish).

If you're part of your community's government or transportation department, or have access to these people, or to representatives of Congress, use your position to influence the policy makers. Let's ensure that our communities are familiar with this idea, too. Ask about Complete Streets whenever you are talking to your local, state or federal representatives.

Even lower level representatives can help make our roads safer. Money for new roads comes from the federal government but states and municipalities often decide how that money will be spent. Global Bikes can all help ensure that everyone understands what transit accommodation for all really means.

Transportation is a daily concern for most Americans, and in that sense it is every bit as present in our lives as issues like health care or the economy. When we, as a nation, begin to envision roads and streets that are accessible for everyone this great concept will become a reality. Thank you for helping to spread the word and improve our world by completing the streets!

This article is used with permission from America Bikes.