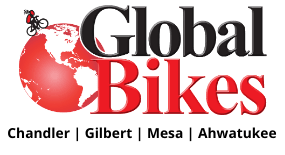 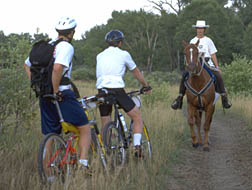 Courtesy and conversation can go a long ways towards keeping our trails open.

While hiker-cyclist conflicts provoke most land-access battles, chance encounters between horses and bicycles pose a far greater threat of injury and death. A horse, by design, is a nervous, cautious beast. Mountain bikers are, more or less, risk-takers. When these two very different users meet unexpectedly on the trail, the results are sometimes disastrous.

Understanding Horses
Deb Carano, a rider for 26 years and world-class equestrienne racer from New England, believes that the majority of unpleasant horse-bicycle incidents arise from ignorance about how this herbivore perceives its world. When scared, humans may choose to fight or flee. Horses have one response, flight - and right now.

One of Deb's housemates, Tunde "Tucsi" Ludanye, has studied equine behavior and sensory perception. She says that horses have an inbred fear of being eaten. It's known to be the fastest animal at distances over 50 yards, but within that distance, it's vulnerable to ambush artists such as lions and wolves. So, that first 50 yards is crucial. To gain this ever-important head start, a horse depends on an amazing sensory system - a 360-degree field of vision and ears which swivel a full 180 degrees.

Easily Spooked
Tucci says it's possible to understand a horse's seemingly irrational reactions as natural wariness. Remember, it's an animal of wide-open spaces, not twisty singletrack. Tucci notes that a horse instinctively fears small, tight, dark places, as places where a horse-eater may be lurking. A tight trail in deep woods may also make a horse nervous.

One of the most volatile elements in the mix is that every animal is different. "My horse Hardin is shock-proof," Deb says. "The previous owner used to take him hunting and shoot a gun off his back." Deb and Hardin also used to tag along behind a racer friend when he trained in the woods. "Hardin loved it. He would just fall in behind the bike and away we'd go. But even with a calm horse, if you startle it, it's going to shy."

Serious Risks
While a horse is a large animal, it's also quite fragile. "There are a number of things that can happen to a horse, just like with any human athlete." A spooked horse, madly dashing over hill and dale, can easily pop a tendon, tear a ligament, break a cannon bone, or twist a fetlock, which is the equine equivalent of spraining our wrist. Any of those injuries entail a long-term recovery and big-time veterinarian costs. A severe injury may oblige the owner to euthanize the animal, which is part cherished friend and part investment. Any rider who has had a horse injured or put down after being spooked by cyclists is sure to hit the warpath against mountain-bike access.

But the party most in danger during unexpected confrontations is the person riding a spooked horse.

"Typically horses weigh 1,000 pounds and up," Deb says. "When you startle a horse, its instinctive reaction is flight, and that's when people get hurt." The most common injuries, says Deb, are broken shoulders and wrists and lungs punctured by broken ribs. But more serious injuries do happen. Deb has seen one rider break his back after getting thrown. She also knows of riders who were killed after they were thrown into a tree or stone wall. Even a sudden sideways movement in the woods may result in the rider being crushed against a tree or clotheslined by a low-hanging limb.

Avoid conflict with these seven steps

Fear of Bikes
Despite having a shock-proof horse familiar with bicyclists, Deb said that she tries to keep Hardin away from mountain bikes whenever possible, more so because she's afraid of how bikers will act than how Hardin will.

"I like trail riding, but it's not relaxing, she says. Given that a horse may spook at the sight of a deer, a few anxious moments per ride in the woods is the norm. Knowing that mountain bikes may be in the area ratchets up the tension level dramatically.

"To be honest, I don't go to areas where I can expect to run into them," she says. "The potential for disaster is just too great where the horse and rider are concerned. I've been there and it's not fun."

Getting Along
That admission begs the question: Can we get along? Yes, if we show respect and a sense of knowing what horses do and what they need. If we don't do that, we're going to be denied access to a lot of great mountain biking. And who wants that?